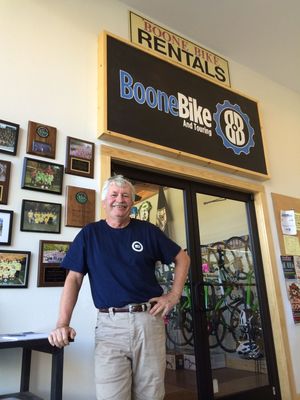 Curious about the origins of Boone Bike & Touring? You're not alone!

Sarah & Shaw Brown, shop owners, expressed concern in 2014 about relocating the shop to it's current location, "We were worried about customers being able to find us."

They were reassured not to worry by Dean Lyons and Larry Norris — two guys who have been customers at “Boone’s Original Bicycle Shop", since it opened in the 1970's! Sarah sat down later with these "OG's" to find out more details about the early days of Boone Bike.

Ironically, Boone Bike & Touring began in Blowing Rock in 1979, opened by Tim Ireland, a 20-something with a passion for bicycles and racing. For the first six months, the shop was on Sunset Drive near the Main Street intersection. When winter kicked in, Ireland returned to another passion to pay the bills — ski instructing.

From 1980 to 1983, Boone Bike & Touring hop-skipped from one location to another in Boone, as Ireland nurtured his new business, attempting to find the right space with visibility and room to grow.

In the early days, inventory was limited, but the repair shop was solid, and the passion for the sport began to spread. Despite what the name of the business implies, Boone Bike has never led bicycle tours. Back then, the word “touring” implied “touring around the countryside,” not racing your bicycle, according to Norris, since you only had a few choices of bicycle type back then.  You either bought a touring bike or a racing bike. 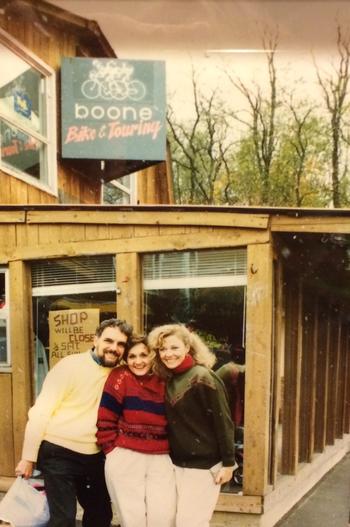 Wearing sweatpants, tennis shoes and no helmets, they both recall the moments that led them to shave their hairy legs and ditch their "handlebar bag" touring bicycles.

While riding on a tandem bicycle, Ireland and then-girlfriend Vicki Coffey told Lyons, “Get behind us! Get as close as you can! And stay there!” as they went screaming through the tight turns on U.S. 221 from Grandfather Mountain back toward Blowing Rock.

Norris felt that same rush descending Shull’s Mill Road on his first Peugeot racing bicycle. Lessons in drafting and other racing tips were often shared by Ireland as his loyal following began to grow. By 1983, King Street had become the shop’s new address, spending a few years in the current Mountaineer Mania location, before moving across the street to the current Wildcraft Eatery restaurant. Ireland gained the visibility he desired, established a solid reputation stocking Trek bicycles and sold the business to Peggy and Len Clinard in 1986.

The shop was managed by Bart Slatton, and in perfect complement to the roof line of the building, he renamed the shop “Boone Bike and Runner’s Barn,” adding running shoes and apparel. Unfortunately, the running component didn’t take off like they had hoped. By the late 1980s, the Clinards “saved the shop” and restored the original name, according to Norris. 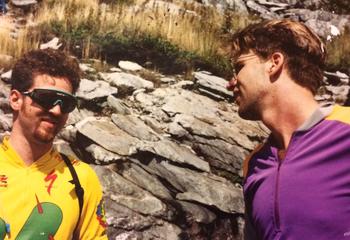 With Len’s strength as an accountant and cyclist, combined with Peggy’s drive and bubbly personality, the shop succeeded. Under Peggy’s management, they began to sell more and more brands: Trek, Gary Fisher, Klein, Giant, Diamondback and Specialized. By the early 1990s, they had outgrown the space and relocated the shop to the Blowing Rock Road location across from McDonald’s.

Their investment paid off. In 1993, Bill Pressly purchased the now “professional shop,” expanding his staff, hours and reputation for being a destination to not only purchase bicycles, but for the full-service repair shop and rental bicycle options. After 10 years of ownership, Pressly sold the shop to his manager, Shaw Brown, to allow more time for his true passion, surfing. Having worked for both Peggy & Bill, Shaw was ready to take the reins.  After the first year of ownership, and five years teaching middle school, his wife Sarah "retired early" to join him and work full-time at the shop. 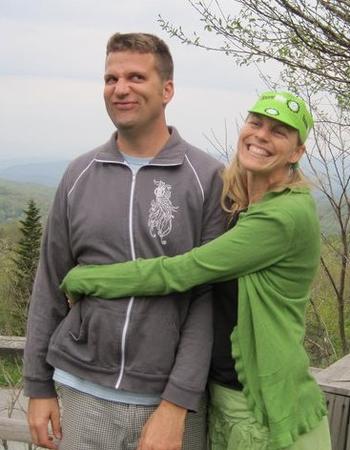 Through every transition, Lyons and Norris have been dedicated customers. Lyons said he’s watched Boone Bike grow from “amateurs with passion to a professional business, but the enthusiasm still remains.”

Norris thinks the main difference from then until now is that “You don’t have to wait for what you want. There are more options available now. The inventory is greater, the turnaround time for repairs isn’t a mystery, and the atmosphere is friendly for everyone.”

“We were anxious about relocating the shop in 2014, uncertain our customers would be able to find us across town,” Sarah Brown said. “Little did we know, the shop had moved seven times over the past 35 years. The new location has definitely improved access by car, makes bicycle test ride options safer, and building ownership will keep us here for years to come.” 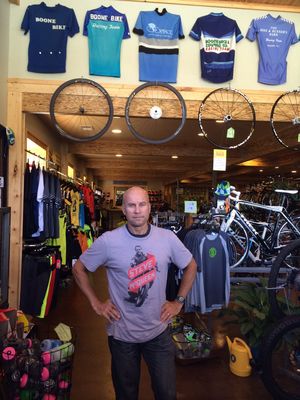 As men climbing and descending the age of 60, Lyons and Norris still love to ride their bicycles.

“Until I can afford a race car, I’ll keep racing for that adrenaline rush,” he said.  Lyons has logged around 1,700 races, still taking home podium positions.

Norris put his racing career on hold while raising his family, staying connected to cycling by becoming an official.

“It gave me an excuse to get a motorcycle,” he said, “and getting paid to ride it.”

Fortunately, Boone Bike’s customers found the store in its new location, as Lyons and Norris have proven they know how to do.